Here is a selection of some books about Italian classic cars that you may find useful.

If Alfa fans ever needed confirmation that the Fiat takeover was a lot more than mere badge engineering, then here is the proof. The second edition of this well-recieved book chronicles the wealth of new models launched by the marque since 1986 and the ground-breaking power units that drive them. David Owen provides an authoritative insight into post-war Alfa Romeos, from the 1900 through to the sleek GT coupe available since the end of 2003. The lavishly illustrated text includes driving impressions, buying hints and specifications, together with marque information.

Bugatti Veyron: A Quest for Perfection - The Story of the Greatest Car in the World

The Bugatti Veyron's statistics are mind-boggling: 0-60mph in 2.5 seconds; a top speed of 253 mph; tyres that cost £20,000 a set and an engine with ten radiators and four turbos; a launch control system taken from F1 and even windscreen wipers that create sizeable downforce ... all delivered complete with a high-end stereo system, luxurious leather seats and air-conditioning. It was a feat of engineering grandiosity that, in automotive terms, rivals the achievements of the great 19th Century industrialists.

In A Quest for Perfection, no. 1 bestselling author Martin Roach sets out to track down the mythical beast that is a Bugatti Veyron - and ultimately attempts to drive one. He traces the genesis of this remarkable machine through Bugatti's long and glorious early days and then through its more turbulent modern era. Travelling to the top secret Bugatti Research & Development workshop in Germany, touring the factory and chateau in France where these stunning cars are hand-built, interviewing famous engineers, super-rich owners and automotive presidents, as well as a host of other expert eye-witnesses to this unique car's many achievements, Roach ponders this mechanical whirlwind and in so doing has written a page-turning study of a modern masterpiece.

Bugatti Veyron: A Quest for Perfection discovers and unravels the enigma that is this remarkable car. Part-history, part-personal obsession, part-travelogue, part-humorous quest, altogether a book that will appeal to both fans of cars, and serious petrol-heads, Top Gear viewers as well as anyone who has ever raised an eyebrow as a shiny piece of metal on four wheels drives past in the street. For the first time, Bugatti has allowed access to the Veyron's Chief Engineer, designers, test drivers, archivists, the Bugatti factory, photographers and the President of Bugatti himself.

From the first Ferrari 125 S in 1947 to the Ferrari 590 GTO of 2010, the automobiles of the Cavallino Rampante (prancing horse) have marked the history of motoring on the roadway as well as on the racetrack. The fascinating line; the inimitable red of the chassis, now become paradigm; the power and unmistakable sound of the V8 and V12 engines have made, and continue to make, the automobiles produced at Maranello, in the province of Modena, a veritable legend on the road as well as a symbol of Italian excellence. Cars of refined style, the work of illustrious planners and designers like Pininfarina, Bertone, and Vignale, Ferraris are dreams come true for lovers of four-wheeled vehicles, and veritable cult objects for appassionati and collectors around the world. Enzo Ferrari, the founder of the prestigious automobile company, said: 'The best Ferrari ever built is the next one'. It's a legend that continues to renew itself.

When the 495bhp Gallardo was launched in 2004, motoring journalists were impressed - this stylish supercar combined the ferocity of Lamborghini with the polish and practicality of Audi and, at around GBP115,000, didn't scorch the wallet quite as much as its bigger brother, the Murcielago. Lamborghinis have always quickened the pulse, of course, and this book shows why. Packed with model analysis, driving impressions, technical specifications, buying hints, personal anecdotes and sumptuous photographs, it tells the story of this exotic marque, from the peasant background of the founder Ferruccio Lamborghini, to its burning ambition to beat Ferrari in the manufacture of supercars. 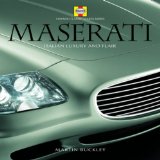 After establishing its name through racing success, Maserati built some of the world's most desirable sports cars during the 1960s and '70s. After a period in the doldrums in the 1980s and '90s, the marque has emerged during the past ten years and is making some great cars again under the stewardship of parent company Fiat. The new Quattroporte in particular is one of the finest cars Maserati has ever built. This is an essential addition to the "Haynes 'Classic Makes'" series, blending history and technical information with driving impressions and buying hints.