Here is a selection of some books about American classic cars that you may find useful.

American Independent Automakers: AMC to Willys 1945 to 1960 (Those Were the Days Series)

"American Independent Automakers 1945-1960" covers the attempts by major makes such as Kaiser-Frazer, Willys, Packard, Studebaker, Tucker, Nash and Hudson to compete with the 'Big Three' in America. The 'Independents' were the first to introduce all-new models in an attempt to increase their market share and ensure the future. Also, there were dozens of backyard enthusiasts trying to design the perfect American sports car, such as Cunningham, Fitch, Darrin, Williams, etc. A similar number endeavoured to build small, economical cars such as Davis, Allstate, Playboy, Crosley and the diminutive King Midget, yet all were ultimately doomed to fail. There were steam cars, microcars, three-wheel cars and flying cars, all competing to capture the consumer's fancy and become significant builders in the years following World War II. Detailed captions and supportive text combine with the use of contemporary brochures, period literature, factory photos, and over 90 new, unpublished colour photos of restored examples to relate the importance of these historic vehicles. This book looks at all the major makers, focusing on the innovations, unique styling and features, and why, ultimately, all failed. 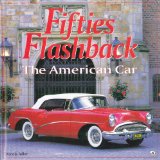 No other era in automotive history is as revered as the 1950s, when Detroit was the center of the auto world and the American V-8 was king of the road. With hundreds of color photos of beautiful restorations and a collection of rare archival photos, Dennis Adler has compiled a detailed history of the emerging postwar American auto industry.