Set in 150 acres of beautiful parkland, Legoland Windsor is the home of the world-famous family-friendly brick theme park. The park was built on the site of Windsor Safari Park and opened in 1996. The attractions are mainly targeted at children aged between two and twelve.

Lego is made up of colourful interlocking bricks and an accompanying array of gears, mini-figures, and other pieces which can be assembled and connected in various combinations to make cars, planes, trains, castles, ships, spaceships, and even working robots.

At Legoland there is something geared towards every member of the family and plenty of attractions you can all enjoy together. These range from kid-powered rides (cars, boats and planes), building challenges, a unique mix of interactive attractions, exhilarating roller coasters, shows that pull the audience into action and so much more.

Legoland - Entertainment For All The Family

There are two basic types of things to do at Legoland: rides and activities.

As you would expect, the parks' rides are all Lego themed. Many are made to appear as if they are built out of Lego bricks. Among other things, kids up to age 12 can become a car driver, pilot or a sea captain as part of the interactive rides.
Some rides have age and/or height restrictions. Be prepared to queue for some of the rides. Some rides (aimed at younger children) typically have smaller queues. Waiting times are posted at the main attractions to enable you to plan your day. 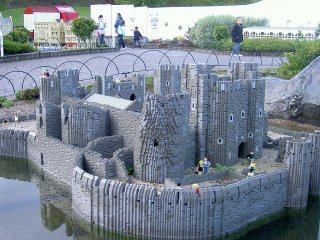 The park is split into 9 areas, most of which are based on a range of Lego sets. These are:

There are 10 places to eat. They are not cheap, but are excellent quality. All are crowded at lunchtime. The largest is by the harbour. You are allowed to bring your own picnics.

It is almost impossible to do it justice (and get your money's worth) in a single day. At most, you and your family will cover around half the things to do in your allotted seven or so hours.

Children entering the parks will be fitted with an ID bracelet that can be tracked anywhere within its boundaries - meaning that should they find themselves lost, the parks' staff will easily be able to track them down and alert parents via text message. Lost Parent stickers are available at the Guest Services desk. If you have a mobile telephone, they are a quick and effective way of helping us reunite lost children and parents.

Legoland can be found on the B3022 Bracknell / Ascot road two miles from Windsor. It is reached via the M25 and clearly signposted from the M3 (Junction 3), M4 (Junction 6) and all approach roads. Follow signs from the M4.
Rail: Thirty minutes from London Paddington to Windsor Central, via Slough; or direct from London Waterloo to Windsor & Eton Riverside, with a bus to the Park from stops close to both stations.
Expect traffic queues both on arrival and departure.
A regular link bus runs from Windsor town centre to Legoland during park opening times. Catch the bus from outside the Parish Church or opposite the Theatre Royal every 30 minutes (15 minutes at peak times).

"We took a 4, 6 and 8 year old to Legoland and they all really enjoyed it. The older 2 went on the more adventurous rides and the 4 year old could go on a similar, smaller version so he never felt left out. Yes, the queues in the afternoon for the bigger rides were a pain (worst one was 45 mins) but if you go straight to the rides you most want to do first when the queues are short then you minimise queuing time. We took a picnic so can't comment on the food. Overall we all (adults and children) had a great day out".

Legoland also have parks in Billund, Denmark; Carlsbad, California and Günzburg, Southern Germany. Legoland Billund is the oldest, which opened in 1968.