Despite the grandiose concept, there"s nothing here we haven"t seen before, but Adam Sandler can still be relied upon for some decent laughs--and, in Click, maybe even a few tears. 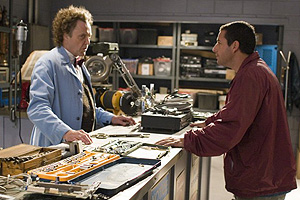 Oh, cruel technology! With so many remote controls for so many devices, Michael Newman (Adam Sandler) always clicks the wrong power button. He"s sick of it. The workaholic is also sick of being too busy to find time for his family. On a late-night trip to Bed Bath &amp; Beyond in search of a universal remote, he kills two birds with one stone. After passing the bed section and the bath section, Michael reaches the "beyond," where he meets an eccentric man named Morty (Christopher Walken) who offers a remote to control his life. No more wasting time or missing out--he can fast-forward, rewind and pause; his life is his own personal TiVo. It"s all well and good until he abuses the fast-forward button and misses all the beautiful minutiae of life. Before long he"s old, sick and alone and realizes--thanks to the rewind button--that he was never there for his family. It"s a simple twist of fate for Michael, but it"s neither his only one nor his simplest.

With Click, some Sandler fans may fear he"s veering towards the Jim Carrey path of gradually more earnest roles. No fear necessary, however, for this is not Carrey"s Eternal Sunshine of the Spotless Mind (similar as the broad existential strokes may be) and it"s not even Punch-Drunk Love. It"s merely light tear-jerking, Sandler-style. He does prove, in addition to his beaten-path shtick-y performance, that he has some drama in him after all these years--which may or may not foretell more serious roles down the road. But there"s still an abundance of his trademark goofiness to go around. As Sandler"s onscreen wife, Kate Beckinsale might go unnoticed if not for her scene-stealing beauty. Her interplay with Sandler is husband-wife cute, if nothing else. Consistently funny supporting turns from Walken and David Hasselhoff--as Sandler"s jerk of a boss--provide the usual semi-big names that Sandler movies typically boast.

Click is a high-concept film--too bad it"s all "summer-ed" up (or down), because film might be the best medium to explore such a fascinating and potentially deep notion. But this is summertime Sandler, after all, and who better to keep the serious stuff from getting too serious than Sandler"s pal/collaborator (and director of The Waterboy and The Wedding Singer) Frank Coraci? The director has the Sandler fan base at heart, and the result is thus decidedly unsubtle and not always pretty for a movie that should"ve, in all honesty, gone with more gusto towards the morose undertones the story puts into place--though the director at least didn"t completely steer away from dramatic elements. The usual goods are still here (i.e. fart jokes, Sandler"s at times hilarious yapping), but the pivotal flashbacks and life themes feel crammed, adding to the movie"s general unevenness. Bruce Almighty writers Steve Koren and Adam O"Keefe add their supernatural twist to straightforward comedy, but they fail to produce anything beyond a slightly less-funny Bruce, with a side of Multiplicity and Mr. Destiny.