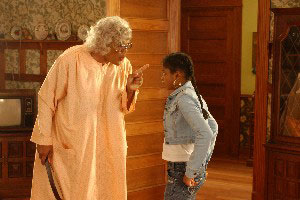 Last we heard, in last year's Diary of a Mad Black Woman, Madea (Tyler Perry) was solving social, cultural and familial problems. What a busy lady! Well, she's done gone and done it again, after a whole new crop of problems pop up that need fixing. This time, the conflicts revolve primarily around two sisters, Vanessa (Lisa Arrindell Anderson) and Lisa (Rochelle Aytes), both of whom are wary of their financial-minded mother, Victoria (Lynn Whitfield). Vanessa is deathly afraid to love again after her husband left her and two kids and fears she might've met Mr. Right in the form of a bus driver (Boris Kodjoe). Meanwhile, Lisa is in a physically abusive relationship with Carlos (Blair Underwood), "Atlanta's most eligible bachelor," but is afraid to leave him. Madea, the antithesis of gold-digging Victoria, solves these and many more problems, as the family reunion nears.

After Mad Black Woman's surprise box office take last year, bigger names were less reluctant to sign on. Accordingly, the new actors in Reunion are very solid—borderline stellar, collectively. The lone exception is Perry as Madea (as well as a few other characters), whose over-the-topness, although expected, reduces the air of professionalism from the rest. Underwood is so damn good at being so damn bad as the abusive fiancée Carlos, while Whitfield matches him chill for chill, in a very icy performance. The relative unknowns/newcomers are the most pleasant surprises, however. Aytes has breathtaking beauty that would normally overshadow acting but not here. Anderson, whose last film was ‘95's Clockers, is equally beautiful and evocative, as a single mother torn. And for the female eyes, there's Kodjoe, whom girls will likely fall for even more when they learn he can actually act.

Perry wears many hats in Family Reunion: writer, director, producer, star--and, oh yeah, he also wrote the popular stage production from which the film is adapted. Perhaps Perry's workaholic attitude contributes to the film's thematic overkill. There are a number of kinks in the film's completely uneven story and the way it is told, but perhaps the biggest problem stems from the fact that it still feels like a stage play. Sometimes that's a plus for a film, but it's hard to think it was intended. This feeling is elicited by the sum of the story's parts. Perry will be in one scene, telling the tale of a beleaguered, battered woman amid a linear and conventional storyline, and in the next scene become Madea in her cartoonish and campy getup, dishing out her tough love techniques. No doubt Reunion is an enjoyable play--only if you agree with Perry's comedic remedies for serious issues.