Final Destination 3 is as tasty as cheese can be that's been sitting in the fridge for ages. Likewise, this moldy cheese will probably stick with those who bite into it. 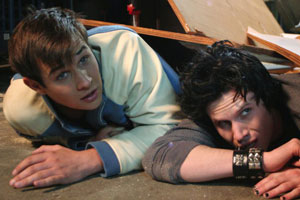 If you've got something to say about Death, you say it to His face-when you meet him! So goes one mantra for Final Destination 3, and luckily, for the film's sake, death personified has no face and is everywhere. It all starts when high school senior Wendy (Mary Elizabeth Winstead) warns several friends off a roller coaster after having a premonition about it. After the coaster goes awry, killing Wendy's friends who didn't heed her advice, the survivors feel lucky-except Wendy. Her premonitions continue, this time forewarning her that those survivors will suffer their fates in the order in which they were to be killed on the coaster. The dead youngsters walking include students and most importantly her sister, her partner in crime-prevention (Ryan Merriman), and, well, herself! FD3 makes it nearly impossible for the Wayans Brothers to make April's Scary Movie 4 their last.

The requirements of the FD3 cast are similar to those of its teen-horror-flick brethren: Each member must look good while onscreen and even better as a victim-which isn't to say they all must look "pretty" as they die, but rather they must look right for their respective deaths. But for the two leads, Winstead and Merriman, they have to actually act. Winstead, the prettiest darned clairvoyant ever, does a surprisingly fine job evoking her perpetual doom, absurd as it all may be. She shows dramatic range that might even exceed the level of cheap fun desired. Like Winstead, Merriman turns in a solid performance as the absolute cliché for this sub-genre. He plays the high-school-jock type, who's thrust into actual emotions following a crisis. All the performances are totally overdone, but that is precisely the protocol for kitsch; thus, jobs well done.

For director James Wong, the film could've been inflected a different way. It could almost be close to being close to being deep-what with undertones of karma and fate and perhaps metaphysics and whatnot-but clearly he knows his audience consists of mostly sneakers-in. Wong directed the series' first installment, and he deftly sticks to the formula that made that-and its sequel, directed by David Richard Ellis-a minor hit. He knows how to arouse the gag reflex with almost cartoonishly silly methods of death, and, of utmost importance, he'll have audiences guessing aloud the wacky deaths that await each character. Like most contemporary horror flicks, FD3 confuses "scary" for "explicitly grotesque." But Wong does enough-barely-to keep subconsciously masochistic audiences from completely closing their eyes and coming back for more. Much like a (bad) roller coaster.