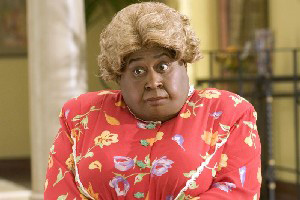 Martin Lawrence is large and in charge in this extended, one-joke skit

robber. While disguised as a cranky, colossal grandmother, Turner tries

falling for the babe played by Nia Long.

designed to showcase his comedic talents. The comedian is put through

should have been called "Martin: Impossible!") His real challenges come

decked out and weighed down in blubbery drag as he dances, shoots hoops

and takes over a self-defense class, only occasionally looking stiff in

the masses of makeup. Unfortunately, so many of Lawrence's chunky,

done to death in films such as "Mrs. Doubtfire" and "The Nutty

Professor." Long and others are capable, but this is Martin's show.

Had Raja Gosnell ("Never Been Kissed") been more comedy conscious, this

film could have been more than a floundering collection of gags.

Gosnell, like too many directors today, falls into the trap of trying to

be everything to everyone. Instead of concentrating on creating a

focused and funny comedy, he crams together plenty of romance and police

action, then wraps it up in warm, fuzzy messages. Once the novelty of

Lawrence in a humongous housecoat wears off, we're left with a massive

This house could use some fixin' up.