Perhaps a tad long-winded, Steven Spielberg's Munich is a still a well-crafted, superbly acted film centering on the aftermath following the shocking Israeli hostage crisis at the 1972 Munich Olympics. Let's just say, it'll get you talking. 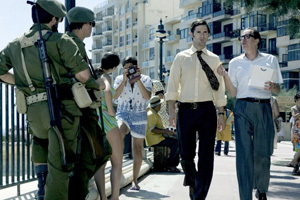 Munich will more than likely hit a few nerves. It begins with the horrifying events at the 1972 Olympics, in which a Palestinian faction known as Black September took 11 Israeli athletes, coaches and staff hostage and eventually killed them. What happened next, however, is where Munich takes off. Under the utmost secrecy, Israeli Prime Minister Golda Meir (Lynn Cohen) and the Israeli intelligence agency, the Mossad, puts "Operation Wrath of God" into effect--the creation of hit squads, comprising of men from all walks of life, who are sent to eliminate those Palestinians responsible for the Munich massacre. We follow one such five-man squad--run by kind-hearted Avner (Eric Bana), a former Mossad agent--as they track down those on their list and assassinate them. Even though they each belief they are doing what is best for their people, soon their violent actions begin to weigh heavily on their souls.

In a film filled with top-notch performances, Bana leads off with a devastating turn as Avner, the only true Israeli of the squad. As the film's emotional core, we see the actor change, in subtle ways, from being a happy, loving father-to-be to a burnt-out shell of a man, haunted by what's he's done and paranoid from its repercussions. Avner's fellow squad members, too, have their own demons to wrestle. They include French director Mathieu Kassovitz, as a conflicted toymaker who is asked to build bombs; German actor Hanns Zischler, as an antiques dealer who specializes in forging documents; Daniel Craig (the new James Bond), as a South African hothead who wants to shoot and ask questions later; and Ciaran Hinds (HBO's Rome), whose cool and collected demeanor belies inner turmoil. In supporting roles, Geoffrey Rush is sufficiently slippery as the Israeli bureaucrat who organizes the squad, while the beautiful Israeli actress Ayelet Zorer, as Avner's wife, adds a touch of sanity to the madness.

When he is in a serious mood (i.e. no special effects or aliens to cloud his judgment), Steven Spielberg generally rises to the occasion and turns in his best, most thought-provoking work. Written with excruciating detail by Eric Roth and playwright Tony Kushner (Angels in America), Munich will undoubtedly inspire lengthy discussions--on what happened then and on how it still rings true today. Though neither the Israeli government nor the Mossad have ever officially acknowledged the existence of these hit squads, a number of documentaries and books utilizing inside sources--including the one Munich is based on by Canadian journalist George Jonas--have since provided details on "Wrath of God" and its aims--and the tense film is already getting flack for its subject matter. But it really goes beyond just the politics and zeroes in on the human aspects--from ALL sides. Of course, in trying to encompass all points of view, Munich tends to run on and has a tough time finding an ending. But it doesn't detract from what you'll inevitably take away from it--a need for peace.