Every sensation a moviegoer hopes to derive from a film will be elicited from King Kong, a modern day masterpiece—and then some. The question is begged: If you're wiping away tears while polishing off a second tub of popcorn, could any other movie be the culprit? 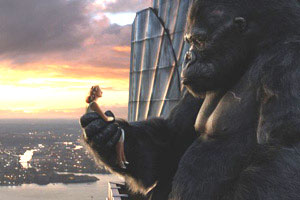 King Kong is the classic tale of beauty and the beast—only the beast may well lie within humanity. With equal parts loyalty and aesthetic enhancement, the film stays true to the 1933 version's timeline, following struggling vaudeville actress Ann Darrow (Naomi Watts) who accepts a part in a film by director Carl Denham (Jack Black). They decide to film on undiscovered Skull Island and set sail (out of New York City) immediately; the director also drags along playwright Jack Driscoll (Adrien Brody) to finish the script. Ann immediately hits it off with Jack, but when they arrive on the island, chief proprietor King Kong claims her for his own. Jack tries to save Ann while Carl tries to capitalize on the beast he dubs "The Eighth Wonder of the World." Sadly, only Ann realizes that there's more than meets the eye with Kong, and she fights to spread the word before it's too late.

The lead actors are, in a sense, brave for enduring the true beast of Kong: the inevitable marketing blitzkrieg to follow. Perhaps knowing they're not the real stars of the movie, the actors make their performances look easy. Watts steals the show, not only communicating the incommunicable by endearing us to an 8,000-pound gorilla but emoting with nothing but a blue screen and Andy Serkis's ape-like motions to guide her through much of the way. The interplay—if you will—between Kong and Ann is the most compelling element to the film. Black might've been an unlikely choice for a semi-serious/villainous role, but he still imparts his trademark mania, his personality not dulled in the least bit. Brody exudes the look of a screenwriter-turned-hero, but it's hard to find his voice amidst the mayhem.

If there's a bone to pick with Peter Jackson, it'd be with the decibel levels of Kong. Deafening sound aside, Jackson again delivers and shows why a studio can enlist him for a $200 million movie and sleep easy: he executes the heart-tugging subplot and mind-blowing effects with equal fervor; when Kong rips up the Big Apple—I'm sorry, the seamlessly re-created 1930s Big Apple—you rue the city, not the studio/CGI props; and when the beast dangles off the Empire State Building, it's incredibly credible. All the while, you can rest assured that Jackson, too, gets lost in the splendor, because it's his layperson enthusiasm that's the film's No. 1 asset. Every now and then, an undertaking like Kong comes around, and it underscores the truly extraordinary accomplishment of directing a film.