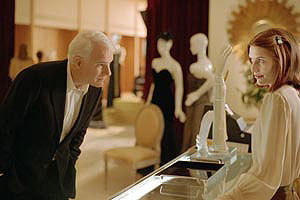 Shopgirl has the uncomfortable voyeuristic feeling we're taking a peek into Steve Martin's personal diaries. The film doesn't seem to capture the humor of his book and boxes him into the humorless straight-guy role without anyone to carry the baton for him.

Based on his popular novella of the same name, Martin takes the non-comedic role in a painfully awkward love triangle. It starts with Mirabelle (Claire Danes), whose stands behind the purse counter of an upscale Beverly Hills department store, waiting for something to happen. Then, along comes a wealthy handsome older gentleman named Ray Porter (Martin) who her sweeps her off her feet with restrained charm and lavish gifts. Meanwhile, an inept suitor, Jeremy (Jason Schwartzman) tries winning Mirabelle's attention but ends up asking her to pay for him on their date. Shopgirl is another loving postcard by Martin to the City of Angeles, but let's hope people in L.A. have more exciting romances than he shows here.

Shopgirl got a tepid response at the Toronto International Film Festival. The faux-praise at the after-party for the actors seemed as forced as some of the L.A. kiss-and-schmooze events depicted in this film. Schwartzman can easily come across irritating instead of funny. Thankfully, in Shopgirl, he transcends his irritating personality and turns charming. But he's just not as funny as Martin, and when he tries the deadpan humor Martin is so famous for, it falls rather flat. Martin has proven he can be great in a drama--The Spanish Prisoner is a fine example. But he excels in comedy, and unfortunately, he doesn't show much of it here. And as far as our leading lady is concerned, she's just as bland as a piece of toast in this.

It's obvious that British filmmaker Anand Tucker (Hilary and Jackie) is an outsider to L.A.. His fascination with the mundane details of the city makes the whole film seem a bit European. Maybe that's good. Maybe that's why Volcano was misunderstood, because it really was a comedy told through the eyes of a Brit. Maybe that's why Venice/Venice so oddly juxtaposed the romantic Italian city with the tacky L.A. boardwalk. Maybe, ultimately, that's why Shopgirl is such a bore at times, with scenes of Danes standing behind a counter looking at her watch and waiting for something to happen. I identified with her because I was doing the same thing.