Namby-pamby wimp Truman Capote got a cold-blooded killer to open up to him. This is a movie showing how he did it, and it could earn Oscar for the talented Philip Seymour Hoffman who brings the man, the myth and legend to life. 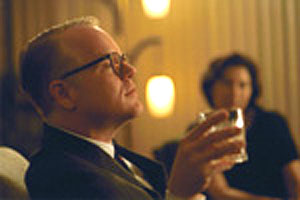 At the height of his writing fame, Truman Capote (Philip Seymour Hoffman) becomes captivated by a small story in the New York Times about a family of four murdered in their Kansas farmhouse by a shotgun at close range. The diminutive bespectacled author, known up to this point for Breakfast at Tiffanys and writing about the New York social scene, heads out to Kansas for The New Yorker magazine with his assistant Harper Lee (Catherine Keener), who would later write To Kill a Mockingbird. Lee helps Capote fit into the small town that is rocked by the murders and introduces Capote to the townsfolk, including the investigator Alvin Dewey (Chris Cooper), who is hot on the trail of the killers, Perry Smith (Clifton Collins Jr.) and Dick Hickock (Mark Pellegrino). Lee keeps Capote in check, as does his editor William Shawn (Bob Balaban) and longtime partner Jack Dunphy (Bruce Greenwood). But Capote is transfixed by Smith, and ends up spending a lot of time with him in jail after the trial. Inevitably, the small Kansas town tragedy leads Capote to his definitive work, In Cold Blood, becoming an obsession for the self-indulgent author. Capote seemingly wants to help get Smith and Hickock an appeal after they are convicted to hang for the murders of the Clutter family. But truly, he is more concerned with himself. He lies, cajoles and fools himself as he toils over the book. He tells people rather callously that he hopes their appeals will end so he could have an ending to the book. And when they do hang, Capote is there. But he never completes another book ever again.

After critics saw Hoffman's performance at the Toronto International Film Festival, one of the prevailing thoughts is that he's this year's Jamie Foxx. He's the man to beat for the Best Actor Oscar for his spot-on portrayal of the irritatingly gifted writer who could get anyone to talk about anything. Hoffman is known for getting into his roles rather deeply, but he can go overboard and has been known to milk his parts to the point of stealing attention away from everything else in the movie (think Cold Mountain or Red Dragon). But for Capote, he's expected to be over the top. Not only will Hoffman most assuredly get a nomination, but the movie could be a Best Picture contender as well as nominations for Keener, Collins and Dan Futterman, for the screenplay. Another nearly hidden, but precious, role is handled nicely by Amy Ryan as Marie Dewey, the Kansas housewife who coos over Capote's visit to their community and ends up giving him the credibility to gain access to the mindset of the town.

Taking this true story to the big screen is certainly a challenge when you have the classic film In Cold Blood out there, but Capote fills in a lot of the gaps that the previous film--and the book--leave out. And it is also telling that there are two films being been made about Capote during the time he wrote In Cold Blood. Have You Heard? starring Brit Toby Jones as the diminutive writer and Sandra Bullock as Harper Lee, is due to be released in 2006. But Capote won the race--and could very well dampen the other's chances. Director Bennett Miller is old school chums with writer/actor Futterman and Hoffman--and Capote is obviously a labor of love between them. Futterman may get too wordy in a few of the scenes, especially between Capote and Smith, but under Miller's guidance, they are tense moments nonetheless, confined to a jail cell. Futterman had access to the actual letters between Capote and Smith and used them word for word in the script. Without comment, Miller offers ugly sides to all the major characters and shows all of their duplicity in a stark and frank way. The film has a documentary feel to it, sticking to the facts and avoiding any preachiness. It offers a window into the world of New Journalism, and the poetic license seen in creative non-fiction and fictional biographies so prevalent today.

Supported by an excellent performance from Philip Seymour Hoffman, Capote offers insight into the author and his idiosyncrasies and could perhaps shed a newfound respect for those of us who may remember Capote as only a creepy talk show gadfly. The man no doubt had a lot of talent, as a writer, a storyteller and a journalist.