Nick Cannon may charm--may--with his boyish smile and silky singing voice. But in The Underclassman, executive-produced (somehow) by 24-year-old Cannon, the singer/actor strains his notes while mugging as a big-screen cut-up. 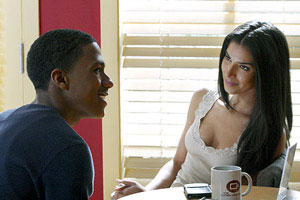 Freshly scrubbed Cannon, as L.A. cop Tre Stokes, solves crimes alongside straight-shooting boss Cpt. Victor Delgado (Cheech Marin). Cannon investigates a prep-school student's murder by enrolling at the school. The too-simple set-up for this dullish fish-out-of-water film leads to a frantic, aimless goose chase of comedy/action in the disappointing tradition of, say, Bird on a Wire. Cannon ingratiates himself with the popular dudes as the wise-cracking basketball stud. He also strikes bizarre chords as a would-be teen who romances one of his teachers (Chasing Papi's Roselyn Sanchez). But the suspense really takes form when Cannon stumbles upon a car-theft ring and a drug ring, um, on the school newspaper's Web site. He also discovers his grown-up self in the process.

Cannon's got poppy charisma as a smooth-talker. In a smarter comedy, Cannon could do damage. But the jokes in Underclassman are so utterly defanged, so throwaway, they're the edgy equivalent of suburban doctor's office banter. Harmless racial jokes are thrown in for easy spice, while groaner after groaner is set up like Wiffleballs on a tee. X-Men 3's Shawn Ashmore, who plays basketball team captain Rob Donovan, slaps on the precise amount of detestable pretty-boy-ness. Marin long ago completed the transformation from '70s stoner; in 2005, he plays the gruff police chief with no patience. Supporting actors know and play their roles in this all-the-way-around big-studio movie.

The Underclassman, for its critical failure, bops along like a pop rock in a glass of Coke for the ADD teen generation. Dialogue is kept mercifully short, so scenes are as interesting as they can be. But the comic sensibility is so off that nearly all audiences will feel alienated, out of touch with the lame one-liners. All the conventions of Another Teen Movie are here: the elitist exclusion by the popular kids; the ''stay in school'' messages; the banging rap music; a villain named ''Murdoch.'' The only thing missing is Samuel L. Jackson saying, ''I came to teach boys, and you became men.''

Our kids deserve better. This Nick Cannon-fronted sloppy action-comedy flops around with a sitcom's look-at-me spunk. The jokes are so bad, they're distracting. Look for The Underclassman to disappear by the third week of school.