The first Transporter didn't make nearly enough money to warrant a sequel, but its all-action-no-talk theme and cult following demanded one. As for its star, Jason Statham, the sequel just proves why he should be approving the next Bond girl instead of toiling in a dead-end franchise. 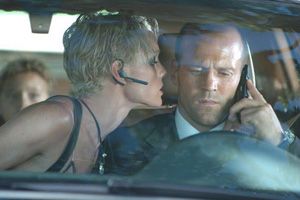 Frank Martin (Statham) latest transporting gig is to race around Miami Beach in his tricked-out Audi, chauffeuring the child of a well-to-do family. What? No-nonsense Frank as a kindly chauffer? Not exactly. He likes the kid, likes him a great deal, but the second he rolls down his bulletproof window, we know he's still no saint. But when the boy is kidnapped on his watch, Frank goes into vigilante-mode. His mission, should he choose to accept: Return the boy to his parents (Amber Valletta, Matthew Modine) without a scratch. But there's a catch. Seems the kidnapping is just a ploy to spread a deadly 24-hour virus from the boy to his politician father, and thus to everyone he then comes in contact with. Now, Martin's charged with the tall task of obtaining the antidote for the virus. By the end, he'll have fought the criminals by land, sea and air to ensure his clients' safety, and in the process dirties his suit, which he hates doing because it just came out of the cleaners.

Whether Statham can ever really go on to do any serious dramatic work remains to be seen. But he's found a niche with Euro-style action flicks in which his lines are few and far between, made weightier when he almost breathes them rather than speaks them. In The Transporter 2, with his impeccably shorn stubble and his trademark articulation, Statham sticks with what has worked for him and saves the film. The rest of the cast just follow along. Perpetuating his odd choice in films, Modine does decent work in making the audience dislike his affluent, too-busy-to-be-a-good dad politician. Supermodel-turned-actress Amber Valletta (Hitch) shines in her biggest role yet, as a mother and neglected wife trying to convince everyone that Martin is the good guy. She should have a nice future, that is, if she can distract attention from her sparkling baby-blue eyes. And doing a damn good impression of a younger, skinner Brigitte Nielsen, newcomer Katie Nauta kicks butt as bad girl Lola, giving Frank a run for his money.

Luc Besson has either written, directed or produced some of cinema's more slick European-style projects. His most famous credits are as the writer of acclaimed TV series La Femme Nikita as well as directing The Professional and The Fifth Element. But with the Transporter series, Besson stays behind the scenes as the producer, letting his protégés have all the fun. One such fellow, Louis Leterrier, who directed just one other film in his career--the Jet Li-vehicle Unleashed--takes on Transporter 2 with relish. As with Unleashed, Leterrier lets the stuntmen and women do most of the talking in T2, never lingering long enough without an action sequence to let audiences dwell on the many over-the-top implausibilities. Clearly, he knows his audience, and upon Statham's first death-defying stunt, anybody who has not already parked his or her disbelief in the cup-holder is in the wrong theater. That said, Leterrier has thus far been doing a bang-up job of playing dangerous safe .

The Transporter 2 is an 88-minute self-fulfilling prophecy unto itself. If you expect mindless, smash-'em-up fun, you'll walk out satisfied, just like you did with the first one.