Saw II may be twice the blood, but it falls in the trap of its past success. 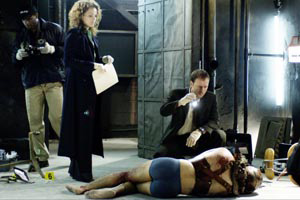 A few months after his horrific series of crimes, the clever killer nicknamed Jigsaw (Tobin Bell) has been captured--cancer-ridden, in a wheelchair and attached to an oxygen tank, no less. But not before enticing victims into yet another web and getting them to appreciate their lives for the first time. This time eight hapless folk are running around a house trying to find an antidote to some poisonous gas that will make blood pour out of their orifices. Among his captors are Det. Mathews (Donnie Wahlberg) and Kerry (Dina Meyer), who were tailing Jigsaw in the first movie. Also included in the fray are Det. Mathews' son (Erik Knudsen) and the only person who escaped one of Jigsaw's traps, Amanda (Shawnee Smith). Remember the horrific jaw trap? We try to forget it, too.

It's nice to see the Jigsaw character developed more. Veteran character actor Bell's (The Firm) steely pale blue eyes and white hair make him more menacing than ever. The interplay between Jigsaw and Mathews is also frighteningly creepy, reminiscent of Anthony Hopkins and Jodie Foster meetings in The Silence of the Lambs. Wahlberg (The Sixth Sense) comes across as tough as well as vulnerable, watching with restrained emotion as his son scamper around a deadly maze and play by the twisted rules of the man who put him there. Smith also shows some range from her original Saw appearance. The rest, however, are one-dimensional, thrown in just to be picked apart by Jigsaw's macabre traps.

With Saw II, Darren Lynn Bousman makes his directorial debut, co-writing with Leigh Whannell, the original Saw's co-writer as well as the other guy chained up in that awful bathroom with Cary Elwes in the original. Bousman's main challenge is to elevate the tension the original created so succinctly, but it fails the test. It isn't his direction, per se, more the need to tell too much. The demand by fans for Jigsaw's backstory results in dreary monologues, which end up dragging the action horror down. The traps are also not quite as ingenious as they were in the original, and some of the widely-touted twists and turns fans now expect from this franchise are overwhelmingly obvious.

Saw II may be twice the blood, but it falls in the trap of its past success.