Kinky Boots fulfills a certain tender obsession one might have for outrageous shoes. But it isn"t just about the shoes--it"s about who wears them, baby! 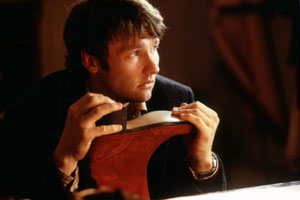 "A heel should be about SEX!" yells Lola, played with electrifying force by Chiwetel Ejiofor. Based on a true story, Kinky Boots takes a look at an old-school shoe factory in the quiet burgh of Northampton, England. Charlie Price (Joel Edgerton) inherits the place when his father passes away--but the factory in financial straits. It is simply outdated. So, on the advice of one of his employees, Lauren (Sarah-Jane Potts), Charlie decides to think out of the box, so to speak, and finds a niche market, selling over-the-top but sturdy footwear to transvestites and drag queens. But he needs vision, since most of the factory"s workers are used to making men"s loafers. That"s where Lola, one of London"s premier drag queens, comes in. She has all the flair and design ideas Charlie is looking for--but bringing her to conservative Northampton proves to be a bit tricky. That is, until everyone gets to know Lola.

Ejiofor is definitely an actor to watch out for. Since making an indelible impression in Stephen Frears" gritty drama Dirty Pretty Things, the British-born actor has been quietly stealing scenes in almost every movie he is in--from playing a deliciously evil drug lord in Four Brothers to Denzel Washington"s sparring partner in Inside Man. But in Kinky Boots, Ejiofor doesn"t have to steal any scenes; he IS the movie as the tough but kindhearted Lola. The rest of the cast does a very nice job, don"t get me wrong. Edgerton (King Arthur) is particularly endearing as the son desperately trying to keep his dad"s dreams alive, while Potts (Wonderland), with her pixie face, plays Charlie"s sweet love interest. But it"s all Ejiofor--strutting around in one outlandish musical number after another, all while helping Charlie save the factory. A tour de force.

A movie about shoes. What could be more fun? Actually, Kinky Boots follows some standard, fairly foolproof plot devices. There"s the son taking over the family business even though he has no interest in it but finds the joy of making shoes after all. Then there"s the drag queen who is just so fan-tabulous on the stage, just OWNS the world, but of course harbors deep pain over a father who never understood her and can"t find the right man to save her life. These kind of Boots have walked before. But with a quirky script from writers Geoff Deane and Tim Firth and an easy-going style from TV director Julian Jarrold, the film further highlights that certain British, wry sensibility that makes most comedies from across the pond so very appealing.