It's hard to invest your time in a horror flick in which cave divers are terrorized by giant underground pterodactyl-looking creatures--especially if it isn't horrifying. 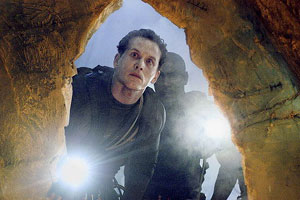 Deep in the Carpathian mountains, a team of scientists stumbles upon the entrance to a vast and intricate underground cave system--one that just screams, ''Explore me!'' But this isn't your Aladdin Cave of Wonders garden variety, filled with treasure and a genie in a lamp. Oh, no. This Cave is deep, treacherous and, well, possibly crawling with any number of things that could kill you. No matter. Biologist Kathryn (Lena Headey) believes there might be an entirely new ecosystem waiting to be discovered (what fun!), so she and her team hire experienced cave diver Jack (Cole Hauser) and his team to help them get in there. But what they all don't realize is that these ancient caves actually do contain brand new species of subterranean life, both small and very, very great. And could it be that some of the more deadly creatures have mutated from--gasp!--human life forms? Yeah, they are about to get into some serious trouble.

How sad for Cole Hauser. He's a fairly serviceable actor with a penchant for solid action flicks (2 Fast 2 Furious), but he's picked bad scripts lately. Paparazzi? Please. Same goes for Morris Chestnut, who plays Jack's right-hand man. He started out strong in Boyz N The Hood but had the unfortunate duty of being terrorized by giant snakes in last year's horrid Anacondas: The Hunt for the Blood Orchid. Also braving the big, bad Cave are Piper Perabo (Coyote Ugly), as a spitfire rock climber; Eddie Cibrian (TV's Third Watch), as Jack's hotshot brother; and Daniel Dae Kim (TV's Lost), as a photographer. Only Headey (who also co-stars in this week's The Brothers Grimm) seems to add a bit of credibility as the earnest biologist. But, really, that isn't saying much.

The one positive thing you can say about The Cave is that it looks pretty darn authentic. With the help of professional speleologists and cave divers, director Bruce Hunt--known as Australia's premier commercial director--paints a realistic view of what these caves represent and what dangers cave divers go through to explore them. Shot entirely in Romania, the cave system described in the movie apparently exists in the Carpathian mountains, and some do indeed contain various new species of life. Of course, none of these creatures are big enough to rip your head off and gnaw on your remains--at least none that they have found, anyway--but you never know. Nice thought. But all the pretty pictures and why-would-you-want-to-go-in-there? moments don't make up for a lackluster scarefest. The twist at the end is mildly compelling, but perhaps The Cave would have been better suited as a documentary on the exploration of these Romanian caves for the Discovery Channel. At least you could fall asleep on a comfortable couch watching it.

The Cave is, sadly, one of those late-summer monster movie wannabes that even the trailer can't make look scary.