Here is a selection of some books about German classic cars that you may find useful. 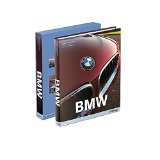 The sign of the white and blue propeller circle has signified BMW since the 1930s: sporty, dynamic, radiating brilliance, with timeless elegance. The mention of BMW brings to mind legendary cars like the pre-war 328, the 507 from the 1950s, or the M1 of the 1970s. But the name BMW also stands for attempts to lend mobility to a wide class of buyers, for example with the Isetta and the 700. In an historical overview, this book first tells the legendary history of the Bavarian automobile firm and goes back to its beginning, the traces of which are lost in the darkness of the First World War. The revised edition introduces the long series of models in chronological order, from the Wartburg Motorwagen of 1898 to the Mini Roadster of 2012, by means of articles and excellent color photography.

Daimler and Benz: The Complete History - The Birth and Evolution of the Mercedes-Benz (Hardcover)

The official history of two of the world's pioneering automotive firms, lavishly illustrated with over 400 color photographs (some never before seen), noted author Dennis Adler tells the inside story of 80 years of automotive excellence. June 26, 2006 marks one of the important dates in automotive history: the merger of the Daimler and Benz motor companies. In this official history, written in cooperation with Daimler Motors, noted automobile historian Adler presents a decade-by-decade look at the evolution of one of the world's leading car companies. The book opens in early days of three pioneers, Karl Benz, Gottlieb Daimler and Wilhelm Maybach, and the birth of Mercedes, the modern motor car. It describes the Great War years, followed by the merger that created this classic car company in 1926. From there it takes a decade-by-decade approach, tracing the inter-war years, the rebirth after the destruction of German industry in World War II, and the succeeding years of prosperity and automotive excellence. With an introduction by racing legend Sir Stirling Moss, and new and archival photographs (some never before published), this book will become the standard for all Mercedes fanciers worldwide. 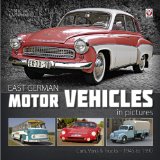 For the first time in English, here is a complete record of all the cars, trucks and buses manufactured over forty years in the German Democratic Republic. The authors have tracked down and pictured, in authentic surroundings, an example of every GDR marque, with each vehicle described by an expert. We in the West can look back on over 120 years of automotive design and manufacture and plot progress in a virtually continuous linear fashion. However, the post War development of the automotive industry in Eastern Germany is quite a different story. In all parts of the West there was a development break during the Second World War, but after the War the growth of the industry in the two halves of Germany went in different directions for many years. Automotive development in West Germany was aided and abetted by cash and investment from America and the Allies, while, for a time, industry of all types in Eastern Germany suffered a certain amount of asset stripping and disinvestment. There was also a stark contrast between the state-driven production methods in the German Democratic Republic and the market-focused development in the West, which today, two decades after the collapse of the GDR, when they are again on the same economic level, it is hard to imagine. However, the eventful years of the GDR automotive industry and the vehicles it produced are recorded in this book with neither political or economic considerations nor really with regard to the technical expertise that went into their development, but rather as a celebration of the vehicles themselves. It is a pictorial documentation of over forty years of automotive manufacture in the GDR and as such is the most comprehensive record of these vehicles that has yet been published. When the Berlin Wall was in place, little was known of the unique motor vehicles which populated the roads of the GDR behind it. Although 'Westerners' got the odd sighting of mystery vehicles, and then a virtual invasion of Trabants in the years immediately following the Wall's demolition, most Europeans have never before had the opportunity to see the plethora of makes and models which abounded in the GDR. Here, for the first time in English, is a complete pictorial record of all the East German cars, trucks and buses. Christian Suhr and Ralf Weinreich have tracked down an example of every GDR marque in their new book, and have taken portraits in authentic surroundings in what was East Germany. Every one of these vehicles is described by a marque expert to ensure accuracy of information. Now automotive enthusiasts of all persuasions can indulge in a truly fascinating voyage of discovery.

Porsche has become one of the most evocative names in motoring history. With a tradition of engineering excellence and innovation, Porsche has developed into a brand synonymous with cutting-edge technology, and the production of stylish, high-performance cars of unrivalled reliability and build quality. The Porsche 911 is undeniably amongst the greatest sports cars of all time. Here is the full, illustrated model-by-model story of Porsche cars, encompassing such classics as the 356, the seminal 911, the 924, 944, 928 and Boxster. 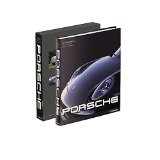 Noblesse oblige this has been true for nearly 80 years now. The cult brand and the Made in Germany cars have stood for the perfect balance of power and elegance and rightly so: about 70 percent of all Porsches ever built are still on the road today, and to this day, all the generations of those striking cars are still eyecatchers in the streets of the world. The small corporation has been defending its pole position with a great sense of quality and passion. This book portrays both Porsche s unique success stories in the motor sports arena and their boldly innovative design and style from the 356 Alu of 1948 to the new Porsche 911 and Boxster. The plentiful highquality illustrations by renowned photographer Rainer W. Schlegelmilch will fascinate any fan of cars and motor sports.

In Porsche 911: 50 Years, bestselling author Randy Leffingwell celebrates a half-century of one of the world's premiere sports cars, focusing on the major themes that have defined Porsche's rear-engined wonder. He tells the whole story—design and development, racing and competition, engineering and technology, style and culture. All the iconic 911 models are included: the original 901 prototype that set the standard; the legendary RS models that made the little Porsche a dominant force on the world's racetracks; the infamous Turbo, the car that kept the performance flame alight during the dark, dismal decade of the 1970s; the fabled 959, the model that redefined the term "sports car"; the 993, last of the original air-cooled models; and the 996, 997, and 991, the liquid-cooled cars that brought the 911 into a new millennium. But beyond telling the story of the cars, this book also spotlights the people behind them: Ferdinand "Butzi" Porsche, the son of legendary Porsche founder Ferdinand "Ferry" Porsche, who co-designed the instantly recognizable 911 shape; Peter W. Schutz, the Porsche CEO who saved the 911 from extinction; and Dr. Helmuth Bott, the engineering genius behind many of the groundbreaking technologies that have defined the 911, including fuel injection, turbocharging, and all-wheel-drive. Leffingwell also tells the story of the 911 community—the clubs and culture that surround the car. Together, all of these facets make Porsche 911: 50 Years the most essential book in any Porsche fan's library.